This year we met in Bregenz which is located in a border region, where Austria, Germany, Switzerland, Lichtenstein meet one another. Although borders have now become irrelevant, the feeling of being somewhat in-between remains a central theme of the regional identity. The author Arno Geiger summarizes his childhood as a commuter across national borders as follows: ‘Whether as a person in general or specifically as a writer: one never fully enters into it (life), and neither manages to fully pass through it (in life) and finds one’s self constantly informed of one’s limitations. We try to get in anyway, to get across, as a writer, as a traveler, the clarity of the unknown. ‘

Vorarlberg however is not only border lands, but also a dense cultural landscape; especially the architecture in the “Ländle” is now world famous. A regional movement at the beginning of the 1980s, which developed out of the work of a number of pioneers, achieved recognition under the title “Vorarlberger Baukünstler“, it combines the international architectural discourse with the rediscovery of traditional regional qualities. So our meeting focused on archtecture: We had a wonderful tour through the region with stops at outstanding buildings, guided by the architects Anton Nachbaur and Andreas Cucrowitz, starting at their new building for the Vorarlberg Museum. Of course we also visited Zumthors Kunsthaus and the current shows, accompagnied by talks with the curator Eva Birkstock and the directorYilmaz Dziewior. And also our members and guest showed and discussed their works. The last evening was highlighted by the reading of the actor Alexander Julian Meile who gave us a piece out of Musils ‘The Man without Qualities.’ But we indeed had a high-quality gathering, with many good meetings, debates and views. 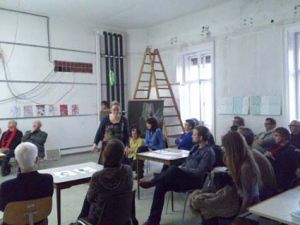 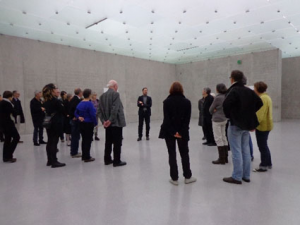