At our meeting 2007 at the beautiful space of the Academy of Fine Arts we were discussing the Idea of Europe. In Vienna as an intersection of different cultural streams we were re-thinking the prodigal mosaic Europe, where still God lies in the detail: A Europe which is not monotony but polyphony, turning into dissonance sometimes. A Europe characterized by particularity which reveals itself in the pleasures and burdens of self-criticism, a Europe which is a landscape of remembrance with, a Europe with its sense for the tragic vulnerability of the condition humaine , with its requisites of literature, philosophy and arts. In a sort of jam session different positions and attitudes sounded together. Invited were artists and artist groups dealing in manifold manners with this idea of Europe, with its borders and transgressions of borders, this also between the medias, art, architecture, music, applied art. Parallelly in Vienna works of all IKG-members were screened in a loop as a sort of digital suitcase. 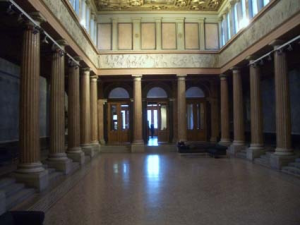 The project was supported by the Academy of Fine Arts Vienna and sponsored by ERSTE österreichische Sparkasse Privatstiftung
Thanks!